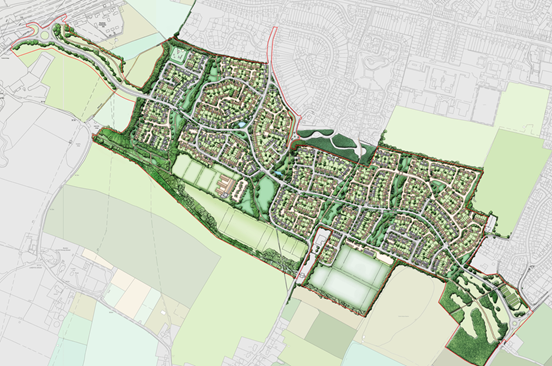 Land at South West Sittingbourne was promoted as a site for residential development within the main modifications to the Swale Borough Council Local Plan, with a subsequently successful site allocation. C&A supported Mulberry Estates and subsequently Quinn Estates through this process, providing multi-disciplinary support including transport, highways and flood risk advice.

An application for 675 houses was subsequently submitted by Quinn Estates and Barratt David Wilson Kent, including for full determination of a first phase for which C&A provided support to BDW. The scheme was very controversial and generated a significant level of opposition. However, C&A worked closely with KCC and HE to bring forward a mitigation package that allowed the scheme to come forward in a constrained environment, using a comprehensive and detailed evidence including a VISSIM microsimulation model of the A2 corridor, including the Keycol junction with the A249. The scheme was ultimately approved in early 2019, going to committee with no objections from either of the highway authorities